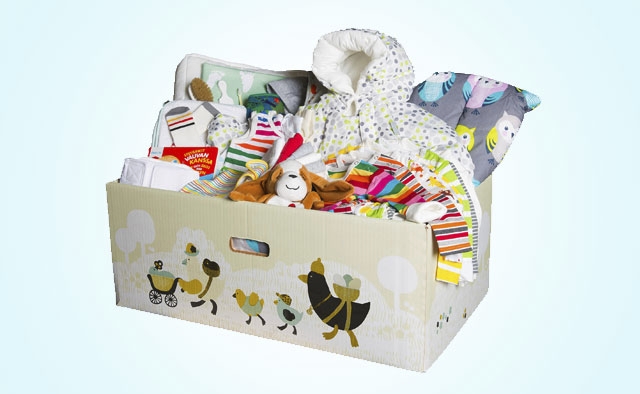 In Pittsburgh in the United States the fifth national conference was arranged in April 2017 by the welfare organisation Cribs for Kids. For instance, the organisation lends children’s beds to indigent families through healthcare providers that monitor that mothers receive the necessary healthcare services during pregnancy. The organisation also has e.g. insurance companies as partners that use the beds provided by the organisation as an argument to induce mothers to undergo medical examinations. A speaker from Kela was also invited to the conference to tell about the role of the Finnish maternity grant and maternity package in decreasing infant mortality.

Kela often receives requests for research data on the effects of the maternity package on the low infant mortality rate in Finland. The relation between these sometimes makes international headlines in a way that may surprise us Finns.

For instance the British newspaper Mirror waxed lyrical about the maternity package’s possible ability to “save lives” since “the fairly small box prevents the baby from turning on to its stomach and so reduces the risk of sudden infant death syndrome.” Mirror estimates that this is ”good news for Britain where infant mortality rates are still among the highest in Europe.”

The risk of sudden infant death syndrome and the decreasing of infant mortality have also been used as arguments in the marketing of the maternity package.

Direct research findings and empirical data on the effect of the maternity package on infant mortality and public health are not available. Instead you have to understand in what kind of society and under what circumstances people lived here in Finland in the starting decades of the 20th century, why the maternity grant was important at this time and how society has changed since then.

About 80 years ago child mortality rates were high, birth rates were low and most of the population were poor. Major public health challenges included the low standard of living and general hygiene, tuberculosis and epidemics. Among the poor there was a scarcity of both clean children’s clothes and bed linens.

The problems were alleviated through charity work. Mothers who had recently given birth received a basket with basic necessities, and the basket was transferred from one mother to another, after the clothes had been washed. This was the precursor of the maternity package.

The development of midwife services and maternity clinics was only in its early stages, but people often did not make use of even the services that were available. Slight progress was made, however. The first maternity clinic in Finland was founded in Helsinki in the 1920s, and in the vicinity of the clinic child mortality rates sank from 15% to 3% in three years.

The maternity grant was awarded either in cash or as items, or both. From the start the grant was an inducement for mothers to visit the municipal midwife, maternity clinic or doctor. A certificate on the pregnancy had to be obtained after the seventh month of pregnancy, at the latest, if you wanted to receive the grant. At the same time, mothers started undergoing medical examinations already before the birth of the child.

When the maternity grant became a benefit intended for all expectant mothers in 1949, there were already maternity clinics in nearly every part of the country. After this time, a medical examination was required at the latest during the fourth month of pregnancy. Visits to the doctor and the midwife at the maternity clinic have been free of charge from the start.

Linking the maternity package to health care services and medical examinations was very significant from a health viewpoint. The development of pharmaceutical treatments for life-threatening bacterial infections in the 1930s and 1940s had a significant effect on public health, as had the initiation of vaccination programmes in the 1940s and 1950s, vaccination of new-borns against tuberculosis starting in 1941 and the extension of the hospital network in the 1950s. On the legislative front, 1964 saw the introduction of the Sickness Insurance Act, while the Public Health Act became law in 1972.

Originally, the maternity grant was also supposed to reduce income differences. At the beginning of the 20th century, the 4–6 weeks of child-birth leave of mothers who earned their living through salaried employment meant in practice a prohibition to work, and the mothers lost their income during this period. When the Government proposed legislation on the first maternity grant, in 1937, the proposal concerned assistance intended for indigent mothers to be awarded to a higher amount to mothers who lost their income than to mothers whose subsistence was arranged in some other way.

However, the final version of the maternity grant was a benefit with the same amount for everyone which, despite means-testing, was fairly generous. The grant was awarded to about two-thirds of all mothers. At the time most mothers still lived in the countryside, and the maternity grant corresponded to approximately a third of the average wage of an industrial worker.

In the beginning, decisions concerning the grant were taken by the municipal welfare boards. Kela has handled the distribution and administration of the maternity package since 1994. Compensations for loss of income to working mothers have only been paid since the introduction of the Health Insurance Act in 1964, and mothers without any income were entitled to the minimum allowance.

The package was not designed to be suitable as a sleeping-place until 1941. This was supposed to prevent the spreading of contagious diseases to the children. Rakel Jalas’s guidebook Äideille (For Mothers) informed mothers in the 1940s and 1950s that the baby needed a sleeping-place of its own right from the start as protection against infection. The guidebook also included advice on how to decorate the maternity package box nicely and cheaply.

How often and how long children are sleeping in the maternity package box were questions that interested the audience at the conference. There were no comprehensive research findings to answer the first question. On the basis of Kela’s questionnaires on the maternity package we know that in 2011 42% of the respondents had used the box as a sleeping-place for the baby, and in 2017 the figure was 37%. An answer to the second question can only be provided on the basis of an estimate based on practical experience; the box is used as a sleeping-place for about 2-3 months.

In other countries, the maternity package box as a sleeping-place interests people, even more than the high-quality and useful items included in the package. The box can provide a safe first bed for the new-born. Sudden infant death syndrome, suffocation while asleep or sleep-related unexplained deaths are very common around the world.

In Finland, statistics on causes of death have been compiled since 1936, but concerning sudden infant death syndrome only since 1987. In 1936 4,543 children died before the age of 1 year, which means 66 children per 1,000 children born. The most common causes of infant death were related to congenital defects, developmental disorders or general constitutional weakness (40%). Many babies died of pneumonia, diarrhoea, influenza, whooping cough and tuberculosis.

Nowadays only about a couple of infants per 1,000 infants die before the age of 1 year. In 2015 the infant mortality rate was 1.7 children per 1,000 children, i.e. 96 children per year. Of these deaths, 6 were due to sudden infant death syndrome. Nowadays the most common causes of death are related to conditions originating in the perinatal stage and congenital abnormalities as well as chromosomal deviations.

Sleep-related causes of death common around the world

Causes of death related to deficiencies in safe sleep practices or sleeping-place for the child are common around the world. In the United States safe sleeping arrangements for the children are considered an important factor to reduce infant mortality. In 2011 0.43 children per 1,000 children born died due to sudden infant death syndrome (SIDS).

When all sleep-related causes of death are added up (sudden unexplained infant death (SUID), accidental infant suffocation or strangulation in bed or unknown cause of infant death), they constitute the third-most common cause of death. Approximately 1 child per 1,000 children dies of such causes.